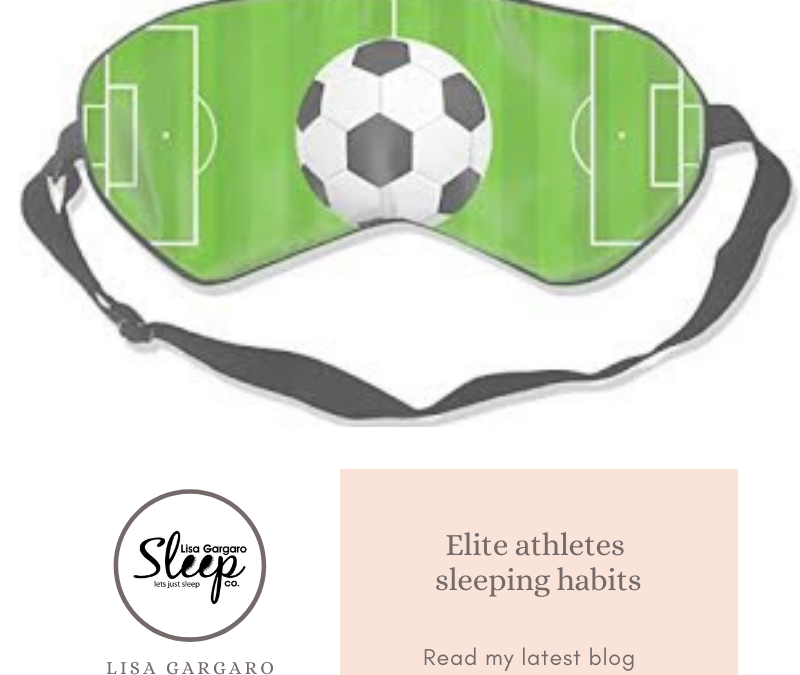 Sleep and performance in Elite athletes

Let’s talk about athletes – we all know that for them to reach the extreme levels of performance they do, their training and eating habits of those best athletes are rigorous as a given. However, when we think about this, do we think about their sleep? Sleep is not something we automatically associate with performance. In all the years of being an asleep consultant, I can only recall a few occasions when discussed. When I say what I do, most people say, “OH, I don’t have any issues with my sleep. I sleep well.”

It is only upon further investigation by asking probing questions such as do they have an established routine. How long do they sleep each night? Do they wake refreshed? The answers reveal a different story completely. These show that most people defiantly are not sleeping as well as they think they are. And without any doubt, they are not getting the right type or amount of sleep that they need to be performing their best, regardless of being an athlete or not.

When I speak with people about their sleep and making changes to it, the first question is, must I follow hard and fast rules? And when they are an individual or team member – are their different habits required for this?

Let us look at what these healthcare specialists know.

When we speak to any Doctor and healthcare specialist that works with Olympic athletes or other professional sportsmen and women of any type –  are all in the agreement of one thing – sleep is absolutely vital for that sportsperson to be able to perform at their peak.

It is well documented and undisputed that there is a connection between how well-rested an athlete is and recognized where their physical and cognitive performance is.

It is during our sleep that our bodies repair muscle tissue, stamina levels get topped us and ensure they regain general alertness. The question many ask is, does this differ between different sports, or does it depend on varying physical demands? Let us take those topics in more detail.

Looking at all the sportspeople out there, what area do we refer to as the most challenging group? It is usually a Triathletes that gets this vote as being deemed as one of the most challenging groups of sportsmen and women on the planet—being due to their bodies get pushed to the limit over extended periods. Their benchmarks being re-setting regularly for their physical endurance as they train.

So how can they ensure they are well-rested for both training and competition alike? In a recent study of triathletes, their success in achieving this revealed some defined patterns achieved it.

It found that 90% of professional triathletes say a routine is essential. The main key being to have the same amount of sleep every night. Regardless of whether they are resting, training, or even competing that following day. With the most significant part being that following a routine every night with a set bedtime. Rather than the approach of following the ‘I’ll go to bed when I’m tired.’ Within this group questioned, a significant majority also strongly believed in and regularly practised power naps, especially during intensive training or competitions.

How can sleep improve athletic performance?

For those triathletes questioned, it revealed the importance of Routine. More significantly, when asked how can a good, regular night’s sleep improves performance?

Their concentration increased – leading to fewer mistakes occurring due to better & increased focus.

Studies show athletes who have a better sleep and resting habits suffer from significantly fewer injuries to become elite athletes.

To achieve world-class results. A World-class sleep is demanded.

Some fact & stats to back this up as we know all those sportspeople out there – love an excellent stats ?

Two icons involved in the modern era of sport can confirm this theory.

Firstly, the individual sportswomen Serena Williams. Who is famously the 39 times Grand Slam tennis winner. Who was able to remarkably able to reach her tenth Wimbledon final after giving birth only ten months earlier! Truly amazing!! The response she gives when questioned about this was her sleep. She firmly believes in her unwavering commitment to sleep by having a regular sleep routine, regular daytime naps, and ensuring a high-quality mattress and pillows.

Secondly, from team sports, Juventus legend Cristiano Ronaldo. Ronaldo, aged 34, also likes to sleep eight hours a night, While also having naps a day: At times, he can have had up to five in the day. Nobody can deny he is still very powerful given his age. Many others have not been so fortunate in their career or fitness. He would most definitely seem to have mastered the perfect sleeping, eating, and training method to give him his elite athletic status.

Team works ahead of their times

It was during this time for both Ronaldo & Sir Alex Ferguson’s that Sir Alex took sleep seriously at Manchester United as the manager. During the 1990s, Sir Alex’s realized that while he had a firm grasp on what players while at the club. By way of what they eat. How they trained, and the impact all of this appeared to be on their performance. His realization that he or the club had any control or influence over what each player did. Once they all jumped into and drove off away from the club’s training base in their luxury cars, it was down to their behaviour and intentions.

At this point, Sir Alex persuaded that his players’ sleeping patterns need to become a higher priority. Early pointers with the manager for his success working with these players as well as Ronaldo and defender Gary Pallister, whose debilitating back injuries eased once the teams sleep consultant Littlehales discovered that is the mattress the player was sleeping on was hampering his injury treatment.

Is this just for the elite athletes?

These results do not just apply to the elite level. Anywhere sleep is leverage then an increased performance level occurs. There is also a part-time soccer team from England who also identified the importance of quality rest. They carefully analyzed everything from bedroom temperature to body positions when sleeping; each player received an exclusive individual rest plan. The club also went to the expense of having selected mattresses and pillows made for each player with their characteristics in mind. As a result, recovery after matches improved exponentially as did decision making during games. The new strategy also improved the player’s stamina levels, which led to positive results on the field. The culmination of all this was highlighted when the team managed to turn a 0-3 deficit with 15 minutes to full-time to a 4-3 win. Luck? These players and staff might tell you otherwise.

I also can offer this individual or team support to sportspeople alike.

I am a very experienced Sleep Consultant, and it would be a pleasure to help both you and your family

To introduce ourselves further, I would like to extend you the free offer of an initial 15 min introductory call. During this call, we will have a discovery chat about your current sleep concerns. It will allow us to find out more about each other and what help you need with your sleep.

By having this call, it allows for the opportunity for me to explain how I work—touching upon the various programs I offer – those being either the sleep program or, if more appropriate, a holistic sleep program (which will be essential to ensure no illegal performance-enhancing drugs are taken).

I feel this is invaluable to us in covering how I would intend to help both you and your son going forward with one of my programs should we agree that we are a good match to work alongside together and the rest of your training team. Making your dream of being an elite athlete even closer to becoming a reality.

Book a call via this link.  Selecting the time zone takes you to my availability and allows you to select a suitable time

Alternatively, if you feel or know this is something you wish to proceed with, I will be happy to offer you a unique elite athlete’s sleep program that you can purchase here.