Lisa Gargaro Sleep Co – Blog – How much sleep does an athlete need? 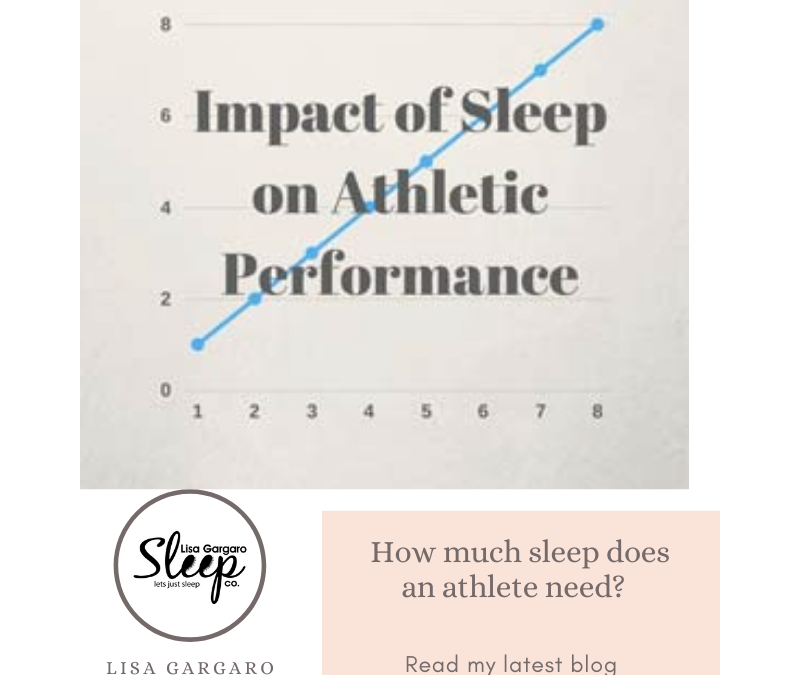 How much sleep does an athlete need?

Well known in the minds of competitive athletes, nutrition and training are front and centre in the minds. However, there is an essential part that is overlooked and understood by many. That said, there is more that needs doing to optimize performance and maintain health than just these two topics. As crucial as they are. You are only achieving what you could be capable of should you ensure you include all parts of the puzzle.

Many miss this, so what is it?

SLEEP – Sleep, for so many competitive athletes, is the missing piece of the puzzle where they need to focus.  The research is detailed. Athletic performance in both the short and long term gets weakened by lack of good quality and quantity sleep.

Let’s have a more in-depth look at both the short- and long-term effects on this now.

Let us look now at these adverse effects more closely.

It recorded that after 30 hours without sleep, a group of healthy young men were asked to perform a fitness test. They had a shorter time to exhaustion during 75% maximal effort bicycling and decreased distance ran during a test on self-paced treadmill.

36 hours of Sleep deprivation reduced time to exhaustion by 11% . While walking on a treadmill by 80% Additionally, when a highly trained endurance athletes had only lost 3 hours of sleep had an increased heart rate and respiration rate while cycling at 75%. Suggesting that their body to achieve the same level of performance were having to work harder.

While weightlifters, who lost one night’s sleep, did not have their lifts affected. However, when asked to get three consecutive nights of poor sleep (just 3 hours per night) significantly reduces both their maximal and submaximal lifts. Which, in turn, leads them to have a maximal bench press decrease by 20lbs on average.

Judo competitors in another study also showed significantly weaker results than expected on their strength tests after a single night of poor sleep.

Research looking at Sprinters’ speed, distance covered, and muscle glycogen. It showed all these results were all negatively affected after missing just one night’s sleep.

College basketball players who increased their daily amount each night by 2 hours (on average) made a remarkable discovery. Over a 5-7-week period, they had significantly improved sprint times.

A study of sprinters who had only had 4 hours of night’s sleep showed the result of this was a significant impact on the overall time by making their time slower.

Those sprinters who took a 30 min nap earlier in that day, to try and recoup their lost sleep were then significantly faster.

In a study of dart players, it found that after just one night of lasting between 3-4 hours’ sleep, those taking part prove to have a significantly less accurate throw than those who had a slept a full 7-8 hour.

A study found that college basketball players increased by 9% in their shooting accuracy after increasing sleep to at least 10 hours per night over 5-7 weeks.

Semi-professional tennis players also were proven to have suffered from a significant decrease in their serving accuracy after a single night of only 5 hours of sleep in direct comparison to their usual standard 7-8 hours’ sleep.

A similar result with Rugby. A players’ passing accuracy is reduced by as much as 20% after having one single poor night’s sleep of between 3-5 broken hours.

Soldiers’ marksmanship also was affected after remaining awake for three days. The accuracy decreased to only shocking 60% of their usual accuracy.

Another key factor in athletic performance is reaction time. Which again is impacted dramatically by poor sleep.

While most research is carried out in a laboratory setting when measuring reaction time due to these not being so physically or mentally demanding.

An extensive review of real-life proved that during military operations-based testing, it found that sleep deprivation leads to a “lack of innovation, unwillingness to try out novel strategies… the inflexibility of thought processes… over-reliance on previous strategies, and inability to deal with surprise and the unexpected.”

Apply this to the world of sport; a split-second decision can make all the difference between holding and retaining the upper hand or losing it.

Exercise is, in general, a critical factor in maintaining good quality sleep. What surprisingly found in elite-level athletes, though, is they tend not to sleep enough. With them having a more inadequate quality sleep when they do sleep than the average person.

Overtraining and overreaching can also result from long-term sleep deficits, which will, in hand, leading to poor performance and a myriad of health issues. Including fatigue, depression, and suppression of the immune system.

Bearing this in mind. Athletes must make the appropriate effort to maintain good sleep habits to ensure performance and health maintenance.

How Much Sleep Does An Athlete Need?

Canadian Sports For Life in 2013 released an excellent guide for athletic sleep requirements. That from the age of  15 years and older, the guidelines recommend athletes get 8-10 hours of sleep per night. In addition to that, they should have 30 minutes of sleep by having a nap, ideally between 2:00-4:00 pm.

Note that aiming for 10 hours of sleep per day will likely improve performance compared to having 8 hours a day.

Optimization of the number of hours slept. The quality should be on a goal list near the top for all competitive athletes. Sleep can often improve by making small changes in sleep hygiene. Examples are by keeping the bedroom dark, decluttering the bedroom, and avoiding screen time. Naturopathic treatments are an excellent means of improving sleep. Clinical nutrition, herbal medicine, and acupuncture offer improvement in sleep beyond fundamental sleep hygiene changes.

I can help you with this. I can create a program you can implement yourself at your own pace via my DIY sleep program. Included is a written workbook you follow at your own pace. Alternatively, I am happy to create a personalized sleep program for you. Specific to your own sleep needs & the areas you wish and where you need to focus on to get results.

The program lasts for four weeks. During this time we work together to get your sleep on track to match your performance in your dedicated field of sport. Unsure which would be best for you? I would like to extend you the offer of a free 15-minute introductory call to discuss this. I can best advise you on what you need to do. Work on your own or with my help – either way. Its what will work for you best is all I am interested in achieving. So, let us now start the journey to the best you.

Click one of the options below to get started now.